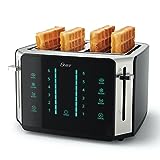 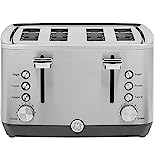 Your Guide To Buying a 4 Slice Toaster

Toasters for household use have been around since 1909. Later, in 1925, they made pop-up toasters, where you could time how dark you want your toast. That was good for two slices of bread. But if you have a big family, you would like the option of preparing a large breakfast quickly. Having a 4-slice toaster is a way of achieving that. They are essentially two 2-slice toasters, side-by-side. For example, you can toast two slices lightly, and the other two more dark brown. It's worthwhile to get familiar with the other features of 4-slice toasters.

We've put together this guide to help you select the 4-slice toaster that answers to your needs. It'll help you:

Here are some typical functions of today's toasters:

Cuisinart—is a brand of home appliances. They are a part of Conair Corporation. They were founded by Carl Sontheimer in 1971, and have their headquarters in East Windsor, New Jersey. They make electric appliances, as well as cookware, bakeware, cutlery, and gourmet tools.

Hamilton Beach—is a manufacturer of home appliances.  It was founded in 1910 by Frederick Osius in Racine, Wisconsin. He took the name Hamilton Beach from two of his employees, Louis Hamilton and Chester Beach. They started by producing motors for mixers and blenders, but then expanded to hair dryers and fans, toasters, slow cookers.

Oster—was started in 1924 by John Oster. He originally made hair clippers, but they quickly expanded to a wide range of kitchen appliances and tools: blenders and juicers, toasters and ovens, coffee machines and kettles.

Electrolux—is a maker of home appliances. They are based in Stockholm, Sweden since 1919, and are a merger of two companies: Elektron and Lux. They make many brands of home and kitchen appliances: toasters, blenders, kettles, irons, ovens, dishwashers, and more.