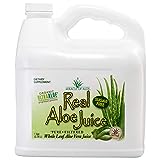 Your Guide To Buying an Aloe Vera Juice

Aloe vera has been used for medicinal purposes for over 3500 years. Aloe vera was always known for its soothing effect when applied to the skin. Nowadays you'll commonly see aloe vera gels to be used as a skin moisturizer, or for burns. But it also has a number of vitamins and minerals that are essential for good health: Vitamin A, C, E and B vitamins, as well as calcium, magnesium and zinc. It also has 18 different amino acids—what the body uses to form proteins. So using it in food and drinks can be a good source of nutrition. But there are a number of aloe vera juices on the market now. Which ones are really good for you? Here is a guide to some of the best aloe vera juice products on the market.

The aloe vera plant is a succulent—it stores water in its leaves. The leaves have a tough skin on the outside, which helps the plant retain water. The aloe vera juice is derived from the inner leaf. But products differ in their concentration of the juice:

There are a number of health benefits associated to aloe vera juice:

Alo—is located in San Francisco, California. They make aloe vera drinks in several flavors, from aloe vera plants that are organically grown in the Far East.

Aloe Force—are producers of raw, whole aloe juice. They were founded in 1998, and have their headquarters in Saratoga Springs, New York. They make aloe vera products for body care, as well as liquid dietary supplements.

Lily of the Desert-- was founded in 1971, and is based in Denton, Texas. They are one of the largest growers and processors of organic aloe vera in the USA. They own organic aloe vera farms in Texas and Mexico, as well as processing facilities, from which they make numerous aloe vera products. They make drinks, gels, and oils.

George's Aloe—is produced by George Warren, a research chemist in Abbot, Texas in Warren Laboratories. He founded his lab in 1979. He has devised a method of removing the aloins from aloe vera juice, which give the juice a bitter taste and a green color. The result is an aloe vera product that does not require preservatives or refrigeration.