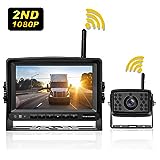 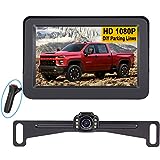 Your Guide To Buying a Backup Camera

Driving can be tricky at times, and parking can be downright dangerous. Even though parallel parking has become mostly a thing of the past, there will still be plenty of times when you’ll need to back into a parking space. In a crowded parking lot, there’s always the danger of backing out of a space and into another car—or worse, a person walking by. Many newer cars come equipped with cameras or other devices to let drivers know what’s behind them, but even if you drive an older car, you can still get the benefit of this technology thanks to the number of aftermarket backup cameras available. Here’s how you can find the best camera for your car.

Wired: With a “wired” setup, as the name implies, the camera is attached to the display via a cable. These kinds of cameras are generally installed, rather than simply attached to the car.

Wireless: Wireless cameras do not require a cable; instead, the image is beamed from the camera to the display in the front of the car.

Screen display: Screen display cameras come equipped with screens of various sizes, which can be mounted for easy viewing.

Based on reviews, here are some of the things that drivers like (or dislike) about their backup cameras:

iBall: iBall is an Indian company that produces a wide range of digital equipment, including computer accessories, cameras, and recording devices.

Peak: Peak is an American company that manufactures a variety of products for cars. Although perhaps best known for its line of antifreezes and other fluids, the company makes a number of automotive accessories as well, including a line of backup cameras.

Esky: Esky produces a wide range of consumer electronics, including a number of different cameras for home and automotive use.