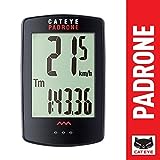 Your Guide To Buying a Bike Computer

When you see the term “bike computer,” your might think that people have finally taken multitasking too far. However, a bike computer isn’t an even-more portable laptop that people can take with them on bike rides. Instead, it’s a device that helps cyclists keep track of how they’re doing—how fast they’re going, how many miles they’ve pedaled, and things like that. If you’re a serious bike rider, and especially if you ride for exercise, a bike computer can be a great way of seeing how much progress you’re making. Here are some things to keep in mind to help you find the best computer for your biking needs.

Standalone: A “standalone” computer keeps the cyclist’s information to itself—the rider can look at the screen to see how he or she is doing, and then manually record the information after the ride.

Here are some of the aspects of bike computers that people online point to when explaining what they love about their bike computers:

Cateye: Cateye is a Japanese manufacturer of bicycle accessories. Founded in 1964, the company makes an array of products, from low-tech accessories such as mirrors and reflectors, to cutting-edge computers and other digital devices.

Wahoo: Wahoo Fitness specializes in fitness trackers and other accessories. The company offers a number of different bicycle computers, heart rate monitors, and other devices designed to help people keep track of their fitness goals.

Sigma: Sigma is a German company that specializes in the manufacture of bicycle and motorcycle computers, along with related products. Established in 1982, Sigma is one of the longest-standing producers of bicycle computers in the world.

Planet Bike: Planet Bike is an American producer of bicycle accessories. Founded in 1996, the company offers just about everything a bike owner might need to fully equip his or her ride.

Timex: Timex is one of the world’s most recognized watch manufacturers. Founded in 1854, this American company’s watches and other devices have an excellent reputation for quality.