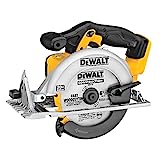 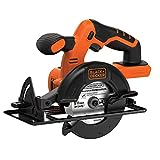 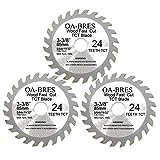 Your Guide To Buying a Circular Saw

Whether you are a professional carpenter, or you are just interested in doing some woodworking as a hobby, a hand-held circular saw is a good investment. But they cut a lot more than just wood: they can also cut steel, stone, and ceramic tile. They are useful in wood-shop classes in schools too. They allow good control when you have to make cut along a straight line. But the type that you choose will be largely dependent on what you need to cut, and who will be doing the cutting. Here is a guide to some of the best circular saws on the market.

Circular saws can be distinguished by their sawing mechanism:

Worm-Drive Saw: In this design, the motor is situated behind the blade. The saw's motors turn a set of gears. These gears make the blade rotate more slowly, but they also increase the torque of the motor. This makes the saw cut more effectively. It is typically used for heavy-duty applications, where you have to cut an entire stack of wood, which takes a long time. But they may be too heavy and hard to manage for amateurs.

Sidewinder Saw: They have the motor situated either to the right or left of the blade. You grip the saw by the motor, so a right-handed person will prefer having the motor to the right. They are lighter and easier to handle than the worm-drive saws.

Trim Saw: A trim saw is a light saw used for small tasks, either on thin pieces of wood or stone, or in glass or stone cutting. They have the blade set in a table, and you slide the item to be cut into the blade. You can hold the item in a vise for added protection, or slide it in (carefully) by hand. They are useful in schools, labs or in after-school activities.

Milwaukee Tool-- is an American company that was founded in 1924 and is located in Brookfield, Wisconsin. They make a wide assortment of power tools, hand tools, meters and testers, and other accessories.

Makita—is a company that manufactures power tools. It was founded in 1915, and is based in Anjo, Japan. They have factories in Europe, Asia, and North and South America.

Porter Cable--a power tools manufacturer, was founded in 1909, and presently has their headquarters in Jackson, Tennessee. In 2004, they became a subsidiary of another power tools giant, Black and Decker. They went from making consumer tools, and primarily make tools for professional users.

Bosch-- is a German company founded by Robert Bosch in 1886, and presently have their headquarters in Gerlingen, Germany. They manufacture a wide range of products: automotive components, industrial products, household appliances and power tools.