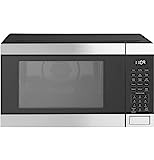 Your Guide To Buying a Convection Microwave

There’s a very good chance that you already own a microwave, and there’s also a good chance that you’ve heard of convection ovens (even if you’re not exactly sure what they do). However, you might not have heard of convection microwave ovens, which combine the two technologies. They use microwaves to cook food, but also use convection—in the form of fans that increase air flow, just like in a convection oven—to allow for even faster cooking as well as browning of food, which doesn’t happen in most microwaves. If you’re in the market for a new microwave, a convection model might be the way to go, and here’s how to find a good one for your kitchen.

The technology that is used in convection microwaves is fairly consistent across models and brands. One minor difference amongst models is the way they are controlled:

Digital: Digital microwaves use push-button interfaces, which allow for maximum ease of use and control.

Dial control: Decidedly more old-school, microwaves with dials instead of push-button controls are actually very easy to use, and add a bit of a retro flair to the machine’s look.

Here are a few factors that people who have purchased convection microwaves have considered:

Breville: Breville is an American manufacturer of home appliances. Founded in 1957 as a home goods retail operation, the company later expanded its production, and today is known for manufacturing several high-end kitchen appliances.

Cuisinart: Cuisinart is an American company that has been one of the world’s leading producers of kitchen equipment since its founding in 1971. The company is perhaps best known for its food processors, but it also manufacturers mixers, microwaves, and a host of other gadgets that make cooking easier.

GE: General Electric is an American company that has been at the forefront of technological advances since it first opened in 1892. Today, the company is one of the most diverse corporations in the country, with companies and production facilities that service virtually every corner of the economy.

Kenmore: Kenmore is an American appliance manufacturer. The brand was founded in 1927, and has since expanded to manufacturing appliances for every room in the home.