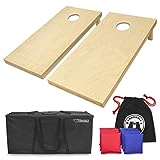 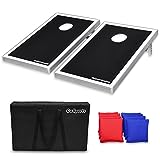 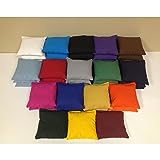 Your Guide To Buying a Cornhole Game Set

Cornhole is an American lawn game very similar to horseshoes. The game has a standard-size board of 2 feet by 4 feet, placed at a slant of 10.8 degrees, with a 6-inch diameter hole placed 9 inches away from the top of the board. The object of the game is to throw bean bags (the bags originally contained dried corn kernels) into the hole, while standing at the lower end of the cornhole board. Here are the scoring rules:

Three points are awarded for getting a bag in the hole; 1 point is awarded for having the bag land on the board. Each player has four bean bags per turn, and tallies their points after throwing 4 bags. Then the opponent throws their 4 bags, and tallies their score. The player with more points for that round deducts their opponent's point total from their own, and that is their score for that round. The winner is the first player to get 21 points.

Even though there are a fixed set of official rules for the size and position of the board, there are still variations in styles. Here is a guide to some of the best cornhole game sets on the market.

Victory Tailgate—was founded in 2008, and have their headquarters in Orlando, Florida. They are the largest manufacturers of custom tailgate games in the United States. They make cornhole game sets, tumble towers, bags and accessories, and more.

Budweiser—is an American lager beer, produced by Anheuser-Busch. It was founded in 1876 by Carl Conrad of St. Louis, Missouri. They also make a corn hole game set with the motto “This Bud's for You” and the Budweiser insignia emblazoned on it.

Driveway Games—is a consumer products company who focus on lawn games, tailgating gear, and swim/water toys. Their headquarters is in South Paris, Maine, and they were founded in 2004. Their games include croquet, bocce ball, badminton, corntoss, horseshoes, and more.