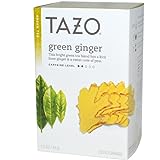 Your Guide To Buying a Ginger Tea

Ginger has been used in India and the Far East for cooking and medicinal purposes for over 2,300 years. The edible part of the plant is called “ginger root”, even though botanically it is actually a rhizome--an underground storage stem. Because of its pungent smell and taste, ginger tea was recommended for cold symptoms during the winter. Chinese medicine also employs it for digestive problems (legend has it that Confucius used to consume it at every meal). But there are a number of varieties and blends of ginger tea available.

We've put together this guide to help you select the best ginger tea that answer to your needs. It'll help you:

Triple Leaf Tea—is a family-owned business in Burlingame, California. They try to combine ancient Chinese herbal formulas with the know-how of modern day herbalists. They make teas for medicinal and diet purposes, as well as regular tea.

Twinings—was founded in 1706 in London, England by Thomas Twining. They now make a variety of 200 teas employing different herbs and flavors, and sold in over 115 countries around the world.

Yogi—was started in 1969, by Yogi Bhajan. He specialized in making blended teas that included five different spices: cardamom, cinnamon, cloves, ginger, and black pepper, and were popularized by Yogi Bhajan's students. This later grew into the Yogi Tea Company. Their headquarters is in Springfield and Portland, Oregon, and they make over 60 different blends of teas.

Stash Tea—is located in Tigard, Oregon, and was founded in 1972. They market specialty teas with natural ingredients. They originally sold herbal teas in bulk, but then started selling them in teabag form. They derive the name "Stash Tea" from the fact that the captain of a ship transporting teas would be presented with a "stash" of the finest teas.)

Traditional Medicinals—was founded in 1974 by the herbalist Rosemary Gladstar and environmentalist Drake Sadler. They have made a number of herbal formulas from medicinal plants for different ailments. Their headquarters is located in Sebastopol, California.