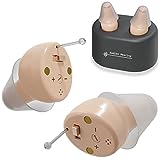 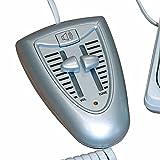 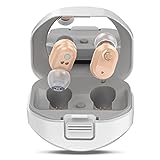 Your Guide To Buying a Hearing Amplifier

Hearing amplifiers are different from hearing aids. A hearing aid is designed to amplify a certain range of frequencies, individualized for the particular patient. It focuses on the range where the patient has suffered some hearing loss. A hearing amplifier amplifies all frequencies. (There may be some settings, to select particular ranges.) If a person needs help hearing when watching TV or during a conversation, it might be that a hearing amplifier is sufficient. It can mean the difference between understanding the dialogue in a film or TV program or having to rely on the closed captions instead. Hearing amplifiers are less expensive, can be bought “over-the-counter”, and have fewer features than hearing aids. But there is still a wide variety among them.  To that end, we have put together this hearing amplifier buying guide to help you find the perfect aid for your needs. It'll help you:

There are a number of hearing devices. First of all, you’ll see a distinction between analog and digital sound amplifiers:

Digital Hearing Aids:  These are programmable devices that select sounds of a particular frequency. They can be set to filter out undesirable background noise so that you can focus on a particular event. These can cost as much as $1000-2000, so they clearly are quite an investment.

Hearing loop: You will commonly see the “hearing loop” insignia in public places. When a person's hearing aid is set on the “hearing loop” setting, they only receive amplification of what is being said into the loop microphone. This effectively eliminates any background noise.

Personal Sound Amplifiers: These are over-the-counter aids, which are cheaper and less selective than the high-grade hearing aids. There are two models:

Assisted Listening Devices: These are devices that are more sophisticated than sound amplifiers. They manage to separate a signal from background noise, using radio, infrared, or inductive loop technologies. They are also significantly more expensive than hearing amplifiers.

Williams Sound—is a privately held company located in Eden Prairie, Minnesota, and founded in 1976. They make hearing aids for professional and personal use, as well as earphone and headphone accessories.

NewEar-- are makers of hearing aids, located in Saint Clair Shores, Michigan. They were established in 1991, and provide hearing evaluations, as well as hearing aids and hearing accessories (batteries, earmolds, etc.).

SoundWorldSolutions-- is a child company to Conversion Sound. They were founded in 2007 by Dr. Stavros Basseas and David Green. Their headquarters is located in Park Ridge, Illinois. They aim to make programmable hearing aids, utilizing cheaper consumer electronics.

SuperEar--is a product made by Sonic Technology Products, which was founded in 1981. They are makers of a wide variety of electronic devices. They make listening devices and sound amplifiers, as well as electronic pest repellers and muscle and nerve stimulators. Their headquarters is located in Grass Valley, California.