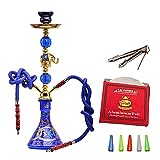 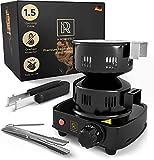 Your Guide To Buying a Hookah

Smoking a hookah originated in India or Persia in the early 1500s. It rapidly became popular throughout the Near and Middle East, and was considered a status symbol, as well as becoming a type of ritual or custom, to some extent. Since the 1960s, Hookah smoking has become popular in the Western countries as well, for its exotic nature. In the hookah, hookah tobacco , also called “shisha”, (or a tobacco-free substitute) is heated by coals. The smoke of the tobacco is then drawn, by inhaling from a hookah hose, through water. The water cools and humidifies the smoke, which is then inhaled. There have been a few types of hookah coals that have been developed in modern times.

We've put together this guide to help you select the best hookah that answer to your needs. It'll help you:

CocoNara—are makers of charcoal from the shells of coconut. They did this out of environmental considerations, in order to reduce the cutting of trees worldwide. They were founded in 2005, and have their headquarters in Gaithersburg, Maryland.

Beamer—are makers of hookahs and hookah accessories since 2010. They make pipes, charcoals, shisha, and air freshener candles for hookah users.