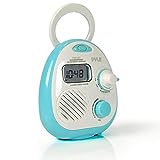 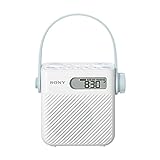 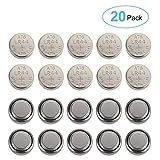 Your Guide To Buying a Shower Radio

Singing in the shower has been a secret pleasure for millions of people for years, and what better way to do it than with the help of backing vocals from your favorite pop stars! Shower radios are hugely popular, and whether you don’t want to miss the early morning news while getting ready for work or want to sing enthusiastically to your favorite iPod playlist, there is a shower radio for you! We have put together this show radio buying guide with all the information you need to know to buy the perfect shower radio for you.

Shower radios come in a variety of sizes with a variety of features and choosing between them should be based on your needs and budget. Shower radios can be divided into the following types: digital tuner, analog tuner, compact, and bluetooth/wireless shower radios and we have included a short description of each for you to compare:

Analog Tuner Shower Radio: Offering the best value for money, analog tuner shower radios allow users to manually fine tune and find their desired radio stations. These radios normally come without any fancy bells and whistles and their simple functions make them ideal for making sure you don’t miss your favorite new program.

Digital Tuner Shower Radios: Digital tuner shower radios take all the work out of tuning by automatically searching for and finding radio frequencies with the touch of a button. Often including preset functions, these radios offer easy operation and tuning.

Compact Shower Radios: Compact shower radios, offering fewer features in a much smaller compact size, are ideal for smaller showers. These shower radios will save you space (and money) and are also great taking traveling with you.

Wireless Shower Radios: Wireless-enabled shower radios use various technologies such as bluetooth, wireless input, antennas, and FM transmitters to allow users to listen to music from MP3 players, iPods, CDs, tablets and smartphones. With access to your personal music library and online streaming services, this shower radio type offers the most music variability.

Pyle:Pyle is a company specialising in audio equipment. Founded in 1960, they have become known for their professional audio appliances, including shower radios.

Conair: Since forming in 1959, Conair has become a leading developer, manufacturer, and marketer of quality health and beauty products as well as electronic appliances such as shower radios.

Sony: An electronic superpower, Sony is a household name when it comes to music players, and it is no different with their top rated shower radios.