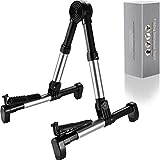 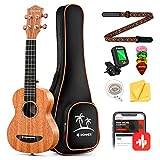 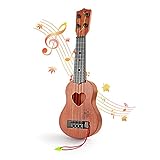 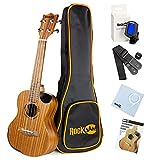 Your Guide To Buying a Ukulele

A portable, classic, and fun addition to any jam session, ukuleles offer a unique sound that people have grown to love. With their growing popularity, so grows the number of available options, and choosing one can be a complicated affair. To eradicate that confusion, this ukulele buying guide has been put together to help you quickly make the right ukulele investment.

Ukuleles come in five main sizes: soprano, sopranissimo, concert, tenor, and baritone, and can be either boat paddle, guitar, or pineapple shaped. The size of the ukulele affects the sound that is produced and the shape will determine how it’s played. Here are the main type of ukuleles for you to compare:

Soprano Ukuleles: The most traditionally-sized ukulele, sopranos are 20 inches in size and produce the most popular classic ukulele sound.

Sopranissimo Ukuleles: Sopranissimo ukuleles are miniature sopranos and are normally only about 16 inches in length. Perfect for travel!

Concert Ukuleles: Designed with bigger bodies and longer necks, concert ukuleles are 23 inches. With a louder sound and more room for frets, these ukuleles are easier to handle.

Tenor Ukuleles: 26 inches tenor ukuleles offer a deeper sound, similar to that of a guitar. Tenor ukuleles are a popular choice for experienced ukulele players and professional musicians.

Baritone Ukuleles: Baritone ukuleles are the largest type of ukuleles and offer the deepest tones. Producing sounds similar to that of a classical nylon string guitar, they are the ideal choice for people who prefer sounds closer to that of a guitar but want the portability of the ukulele.

Guitar/Figure 8 Ukuleles: These ukuleles have a smaller upper bout (or shoulder) than their lower body and mimic the shape of a guitar. The most popular ukulele shape, they more often than not allow for easier access to the upper frets.

Pineapple Ukuleles: Designed in Hawaii, these ukuleles are shaped like a pineapple and have a rounded back.

Acoustic-electric Ukuleles: Acoustic-electric ukuleles are instruments that include an electronic pickup and an onboard preamplifier that transmits electronic signals to a sound system. Perfect for ukulele performers, these are professional ukuleles designed for the stage.

6/8-Stringed Ukuleles: Based on the same scale as a baritone or tenor ukulele, 6-string and 8-string ukuleles are speciality ukuleles designed as an alternative to a travel-sized guitar.

Hybrid Ukuleles: These are instruments that have combined ukuleles with other instruments such as banjos and often incorporate materials other than wood (such as metal) to create unique sounds without losing the comfort of the ukulele shape and size.

Mahalo: Mahalo specialises in ukuleles and provides models of all shapes, sizes, and colors and is a popular ukulele brand.

Oscar Schmidt: A musical instrument expert, Oscar Schmidt has been producing quality instruments since opening in 1911 and is known for their quality wooden ukuleles.

Luna Guitars: Luna Guitars have been producing quality guitars, ukuleles, and accessories since opening in 2005 by an experienced musician.

Kala:Started in 2005 by a passionate Ukulele player, Kala builds over 120 types of ukuleles to suit any need and preference.